Alex, our December Client of the Month 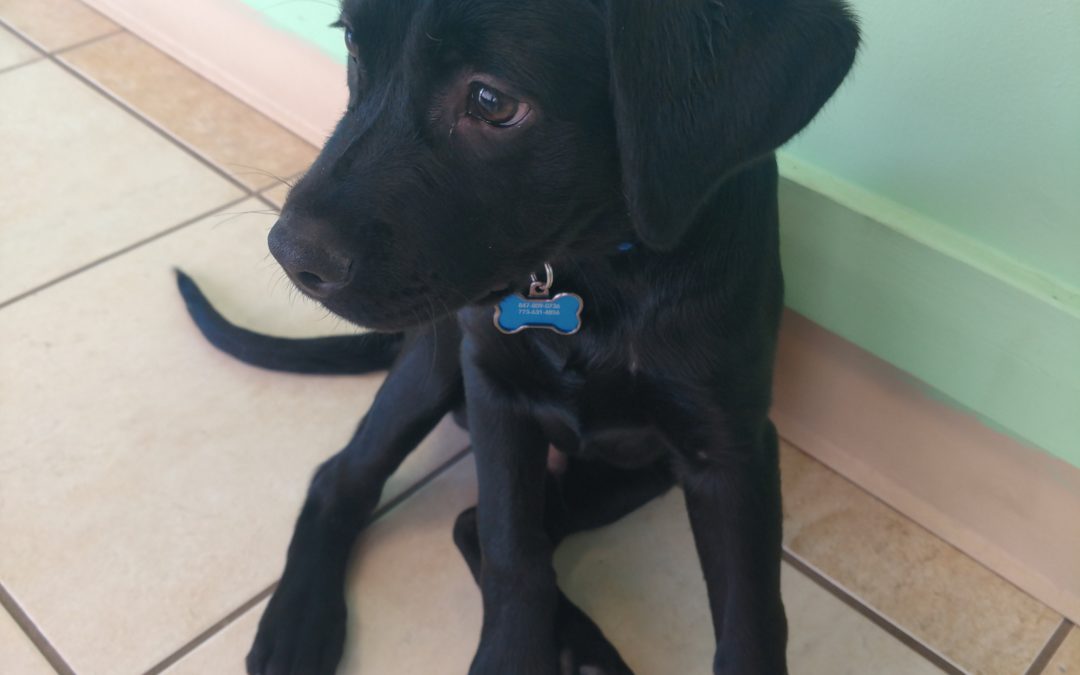 During the fall of 2017, the trainers of Dog Training Now got quite a treat!  We were approached by Silvia, the VP of Operations for Norwood Life Society, an assisted living center in the Norwood Park region of Chicago.  Silvia and her team had decided to bring in a companion animal to live with the residents of the Memory Support program.  Patients in this program are struggling daily with the middle to late stages of Alzheimer’s disease and other types of dementias.  We were quite honored that a member of the Board of Directors, Dave Stachowiak, raved about the results of our 12-Day Board and Train program for his own dogs, which led Silvia to seek us out.  We were thrilled to have the opportunity to contribute in some small way to improving the lives of struggling patients, but we certainly didn’t take the responsibility lightly.

Enter, Alex.  Alex is a Black Lab.  We first met Alex when he was just 8 weeks old in late September 2017, and of course we all fell in love!  Silvia enrolled Alex in both of our Puppy Training Programs right away.  He started in our Puppy Day Camp program, which is focused primarily on establishing good potty training habits as well as socialization with the other puppies in the program.  Silvia dropped him off nearly every day for two months, so he quickly became a trainer favorite, and a fixture of our Facebook and Instagram pages!  A trend you’ll soon pickup on, Alex was a star in this program.  We were quickly able to establish when and where he is allowed to relieve himself, and we quickly built his bladder control to impressive lengths!

At the same time, Alex was enrolled in our weekly Puppy Preschool class.  This group class meets each Thursday evening, and features owners and their puppies working on socialization and confidence building.  Silvia and Alex joined the five-week class in October and without a doubt did not lack for confidence!  He showed all of the other puppies how it’s done during playtime!  This class was also a great opportunity for Alex to be exposed to handling by strangers.  Young, old, novice dog owners, and experienced handlers, Alex loved them all and was more than willing to accept any challenge that we threw at him!  We were definitely getting the sense that Alex was going to be the right dog for the job that awaited him.

In late October, Alex was accompanied by trainer Amy to a Norwood Crossing fundraiser, and he stole the show!  Amy could tell that all of his socialization and confidence building had prepared him for this hectic event.

After graduating from both of our Puppy Training programs, Alex turned 4 months old, and that meant it was time to go to work!  Silvia enrolled Alex in the 12-Day Board and Train program.  He started this program in late November 2017 and graduated in early December.  The 12-Day Board and Train program is our most intensive and immersive training program, and definitely one of our more popular!  Alex would spend his days training at the studio with our trainers, Marcus, Matt, and Chris, and then at night, he would hop in Marcus’ car and head home for the night.  He definitely wasn’t going home to lay on the couch though!  He continued to work on all of the skills that he had honed during the day, but exposed to all the temptations that might cause bad behavior, like kids, cats, furniture, and other dogs!

What everyone at Dog Training Now expected to happen, did.  We immediately recognized Alex as a star of training!  Marcus even made the comment “I know it’s silly, but it’s almost like he knows what job he’s destined for!”  During his first week, he learned how to walk appropriately on a leash without pulling, he learned not to jump up on people, he learned to wait at doorways, and the basic obedience commands sit, stay, heel, and come.  During his second week, he learned to lay down and hold it for extended periods.  We could drop the leash and walk away and Alex would patiently wait to be released.  He also learned the Place command, which will come in handy at Alex’s day job.  Alex, a 4-month-old puppy, is able to stay on his place for up to an hour at this point with more progress to come!

We also made a point to expose Alex to many real-life situations that we expect him to encounter at Norwood Crossing.  We did training sessions while seated in our wheel chair or using our walker and we even worked on Alex’s ability to resist the temptation to pick up a dropped pill by using a treat to build his self control.

We are so proud of the work that Alex has done, and we’re obviously going to miss him dearly, but we’re very excited to see him work!  We’re also honored that Silvia and her team chose Dog Training Now to prepare Alex for his mission.  We can’t wait to see the smiles that he brings to the faces of those who really need it!  While we love all of our clients, Alex has without a doubt been one of our most rewarding projects in quite so