Client of the Month: Casey 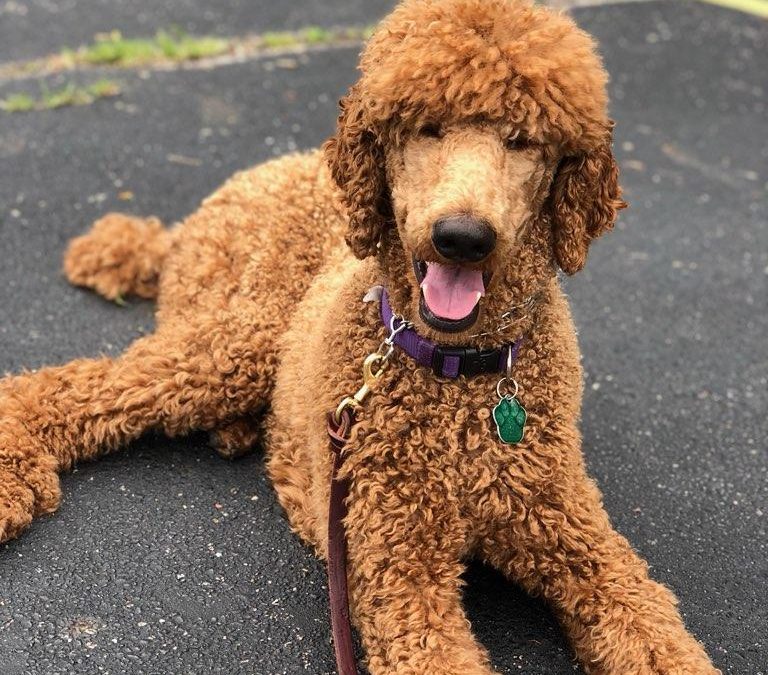 Dog Training Now would like to introduce you to Pat and Debbie Stefan.  They’re veteran dog owners, and have recently retired.  While their home base is in Chicago, they frequently travel to the Florida Keys.  Now that they’re retired, they thought it would be just great to get a puppy to join them on their adventures.  Enter Casey, the Standard Poodle.  She’s our June 2018 Client of the Month. Casey was a tremendously sweet puppy, but boy did she have energy!  They quickly found that Casey’s energy and zest for life caused her to be a real handful, especially when it would come to respectfully meeting new people.  “She jumps 3 feet into the air” Debbie said during her initial consultation at Dog Training Now, visibly frustrated.

By the time she got to 14 months of age, Pat and Debbie had put Casey through 12 weeks of group training, and 6 hours of private training with other trainers in an attempt to help Casey understand the rules and become a better member of their household.  After all that effort, the trainers told the Stefans that Casey had “impulse control issues”, and that perhaps she’d settle down by the time she got to 3 years of age.  Pat and Debbie were at their wit’s end!  They love Casey, but in her current state, she could never accompany them to the beaches in the Keys, she could never join their nightly strolls to Starbucks, and worst of all, Pat and Debbie would struggle to have guests over because Casey’s jumping would intimidate guests.  Casey meant well, but she was out of control! They decided to give training Casey one more shot, and they contacted Dog Training Now.  During their free consultation with one of our trainers, it became clear to us that they were very frustrated, and that we needed to step in and help!  They signed Casey up for our 10-Day Day Training program, which is by a wide margin our most popular program.  Teaching Casey to keep her four paws on the floor when she would meet new people was the primary goal.

Almost immediately, Pat and Debbie noticed a change in Casey’s reaction to meeting people.  In fact, it wasn’t long into the program that Dog Training Now trainers were growing frustrated because we couldn’t get Casey to jump on us!  She did so well!  After 10 days, Debbie mentioned “we have the foundation for a great relationship, and a much better behaved pet”, adding “we have been so happy with the results from day one.  The owners of Dog Training Now and all of the trainers were very professional…making sure we were confident on how to follow through”.

Even better, “Casey will be going to Key West with us very soon”.  We’re so proud of Casey’s progress, and we’re thrilled at the amount of effort that Pat and Debbie have put into helping her succeed!  Engaged clients always end up with the best results, and Pat and Debbie are living proof of that.  They deserve the dog that they have now, and we’re so excited to see how much more progress they make! Off to the Keys!