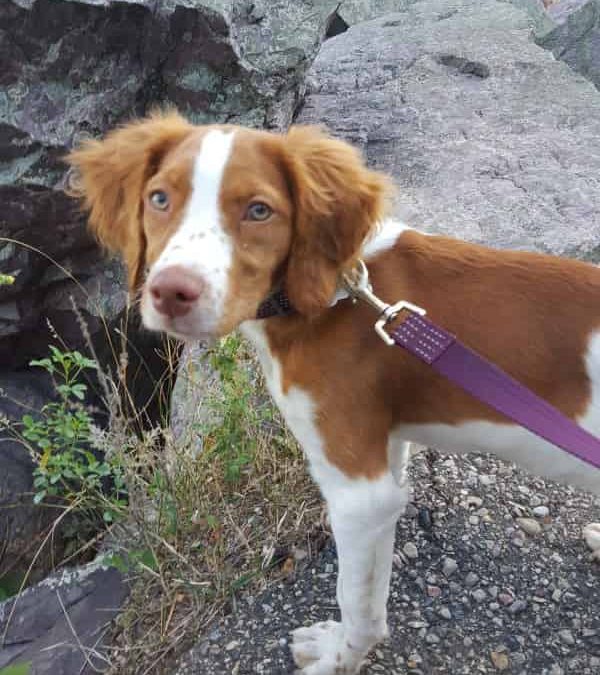 Meet Junie, a Brittany puppy and our newest student at Dog Training Now. Over the next several months, we will be documenting Junie’s journey from rambunctious puppy to an obedient and happy dog. We will keep you updated on all of Junie’s pursuits here at Dog Training Now, and at home. Junie’s time with us won’t always be perfect, and we won’t shy away from telling you how it is really going. Won’t you join us as we love and train Junie and her family?

The basics
Junie’s full name is actually Junie B. Jones, named after a favorite book character in her family. Junie is a Brittany, a bird dog that is often a hunting dog. She was born in mid June and came home with her family when she was 7 weeks old. The family has been without a dog in the home for 3 years now, after they had to put down their old dog, Cody. Cody was a rescue and came to their home when he was 5 years old, fully potty trained and independent but also with quite a few bad habits. This time around, the family researched and decided that a Brittany would be an active and welcome addition to the home. Admittedly, the family has no idea on how to train a puppy, as they have never done it before. They are willing to learn and ready to make some strides in becoming confident puppy owners.

Brittanys are known to be a smart and sensitive breed. They love the outdoors and are typically a great family dog. Brittanys are also relatively healthy and listen to all members of the family equally. They are sometimes known as “Velcro Brittanys”, as they tend to want to be around their humans all the time. That said, each Brittany is different and unique, and Junie is still showing off her budding personality.

Her family
Junie lives with a family of three: a Dad who works as a high school Principal, a Mom who works from home, and a 5 year old kindergarten boy. While Junie won’t be hunting with this family, her humans are avid hikers and have already taken Junie on multiple outdoor adventures. Junie gets plenty of outdoor time on a daily basis as well through frequent walks and playtime in her big backyard. She is especially fond of running up the ramp of the playset in the yard, but she hasn’t gotten up the bravery to go down the slide quite yet.

What her family wants
Junie’s family wants Junie to be a happy and healthy addition to the family. Mom wants Junie to be able to run with her come springtime, if she has good leash manners to do so. Mom and Dad would also like to be sure that Junie is obedient to commands like “come” so that if something ever happens during their outdoor adventures, they can be confident that Junie will respond and listen. As for the kindergartener? He wants Junie to stop nipping at his heels, his pants, his ears, and his hair. They have a love-hate relationship right now, but they both are determined to be buddies.

Our plan for Junie
Junie is going  to start out with our Puppy Preschool program for four weeks. Her family is enrolling Junie into the program a little later than we typically recommend, mostly because the family chose to not add any additional obligations during the month of September since the entire family was transitioning to a full day kindergarten schedule. That’s okay, though, as Puppy Preschool will still be beneficial to Junie at 4 months old.

While she is being introduced to a variety of experiences, we want to get her used to other puppies and for her to gain confidence. More so, we want our Puppy Preschool to be a way for the kindergartener to become more confident with Junie. After Preschool, Junie will join our trainers daily for obedience school where we will work with her on and off the leash, passing along the skills for her family to practice with her at home.

Our goal is to work with both Junie and her family. We want Junie to learn good behaviors, and we want Junie’s family to grow in their puppy confidence. Most of all, we want the entire home to be on the same page when it comes to who is the boss (hint: it’s not Junie) and how to communicate with one another. We’ll be documenting our time with Junie, and her family’s time with Junie, every other week. Check in often to see how our little pup progresses with lots of love and guidance.